The bust of the most recent inductee into the Nebraska Hall of Fame, Charles Edwin Bessey, has been placed in the north west gallery of the second floor rotunda in the Nebraska State Capitol. Bessey’s bust was sculpted by Littleton Alston.  Charles Bessey is best remembered for the hand planted Nebraska National Forest near Halsey, … Continued 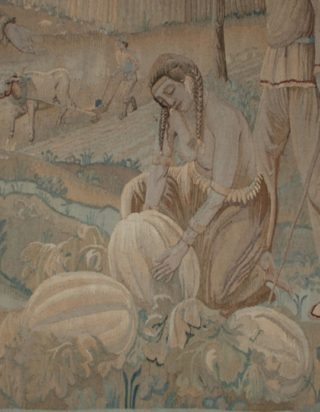 Happy Thanksgiving! The Capitol will be open on Saturday and Sunday

Finishing with a Flourish

Lincoln is home to many oaks and they are providing a final flourish of fall color. For those coming to Lincoln for Thanksgiving weekend or the football game, the Nebraska Capitol will be open Saturday November 26 from 10:00 a.m. to 5:00 p.m. and Sunday November 27 from 1:00 to 5:00 p.m.  The Capitol will … Continued

Hurry while it lasts!

The time is right to view fall colors from the observation deck of the Nebraska State Capitol.  The Autumn Purple Ash trees flanking Goodhue Boulevard south of the Capitol are the annual harbinger of what will soon be a spectacular display of color and light.  From the top of the Capitol Lincoln’s community forest of … Continued

The Promenade at the Nebraska Capitol is a delightful place for a leisurely stroll.  Once again open for the full circuit, staff and visitors are able to take advantage of this elevated walkway. The second floor level exterior promenade reveals a very different view of the Capitol and grounds. The exterior carved panels representing Government … Continued

Visitors to the Capitol this summer have enjoyed tours provided by Anna Matveyeva.  Anna is a high school student from Norfolk, Nebraska participating in the WAGES Program. WAGES stands for Work and Gain Experience in the Summer.  Currently only 30% of blind individuals are employed nationwide.  Of those, only 5% are fully employed. WAGES is … Continued

The lone eyas to fledge at the Nebraska State Capitol this year was given the name Lincoln in the Nebraska Games and Parks Name the Falcon Contest.  Lincoln can be frequently seen staying cool in his nest box.  Birds don’t sweat, so to keep cool, they pant or fluff up their feathers, or like Lincoln, … Continued