The West Legislative Chamber is decorated with scenes of the westward migration of the three nations to claim political control of Nebraska, Spain, France, and the United States. 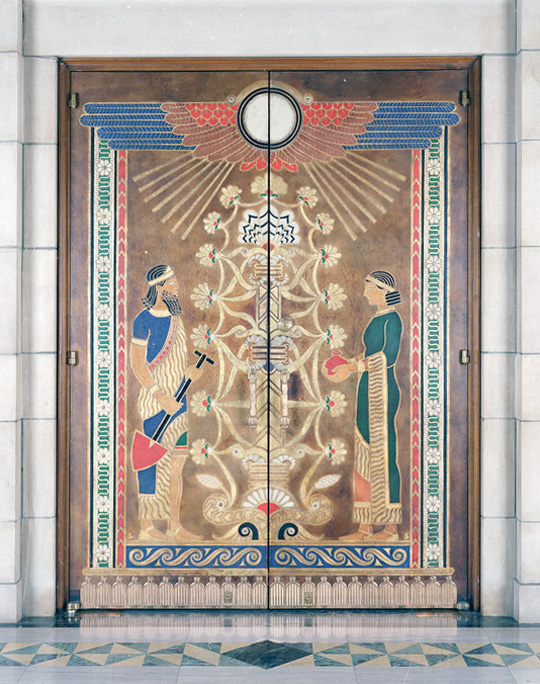 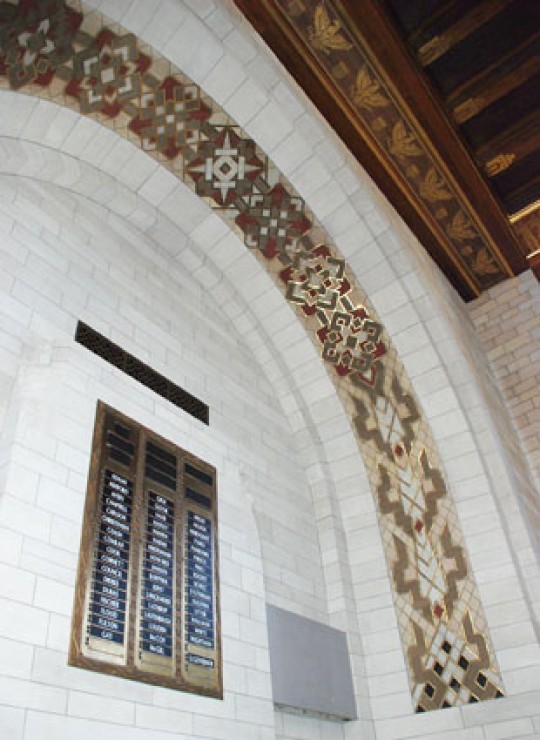 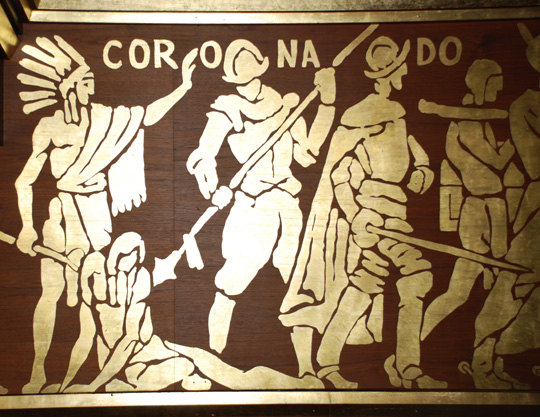 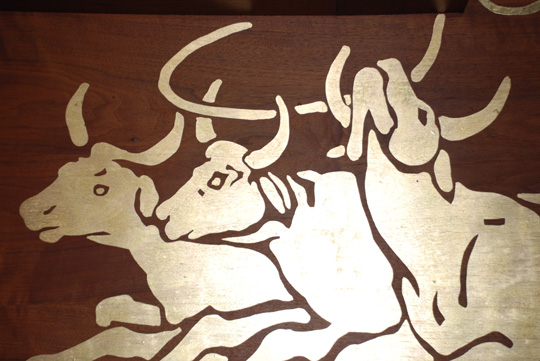 The cattleman arrive with longhorns

The settlers followed the cattlemen in the region

The West Chamber was chosen to house the new single governmental body because it was the larger of the two chambers. The two chambers are decorated to represent the two groups which brought their cultures into the Plains. The East Chamber symbolizes the aboriginal life of the Indian. The West Chamber symbolizes the European age of settlement, with the successive appearance of the Spanish, French, and Anglo-American upon Nebraska Soil.

The leather doors of the West Chamber show the agricultural foundation of Western Civilization in the ancient middle eastern region. With the Assyrian man and woman planting a tree of life under an Egyptian sun.

The West Chamber symbolizes the European age of settlement, with the successive appearance of the Spanish, French, and Anglo-American upon Nebraska Soil.Early European explorers and the successive arrival of the cattlemen and homesteaders are represented in the walnut ceiling beams. The gold leaf scenes of exploration on the south beam of the Chamber features Coronado’s exploration north from Mexico in the 1540’s, Sieur De Bourgmond exploring the Missouri in the 1710’s and the Lewis and Clark Expedition following the Louisiana Purchase. In the north beam the United States surveyors prepare the way for cattlemen driving the great herds north to market and the arrival of homesteaders from the east seeking a new life. Multi-colored marble columns in the chamber reflect the multi- cultural heritage of Nebraska.

The Speaker’s Niche in the West Chamber features a mosaic pattern of stylized prairie flowers and ears of corn. The Guastavino tile pattern features the gold glazed tiles found in Capitol’s ceiling mosaics and the specially designed tile used in the West Chamber walls. The bronze voting panel was the first electronic voting panel originally installed in a state capitol. Senator’s votes are displayed for the public with green lights for yes votes and red lights for no votes. The tally of aye (yes) and nay (no) votes are automatically displayed at the top of the panel.

The West Chamber is named the George W. Norris Chamber after the founder of the Unicameral in Nebraska. The unicameral meets every year, sessions begin in January and run for 60 and/or 90 days in alternate years to allow for bi-annual budget planning. The Unicameral has 49 members, called State Senators, who are elected from districts based on population. The body is non- partisan. Visitors are welcome to view the sessions from the third floor west balconies.