Capitol architect Bertram Goodhue’s design for the Nebraska State Capitol included four interior courtyards. The courtyards served several purposes. The cross in a square floor plan design allowed for the phased and cost saving construction of the new building around the old. Built without air conditioning, the courtyards with their fountains would provide a cooling affect in the building, similar to the atriums and water features used in historic Roman and Persian design. When the Capitol was completed in 1932 the fountains had fallen victim to the Great Depression, but the grounds and courtyards were landscaped according to plan in 1934.

The fountains Bertram Goodhue intended to occupy the four courtyards were installed as a gift from the Nebraska Unicameral Legislature to the State of Nebraska in celebration of the 150th anniversary of Nebraska’s statehood in 2017. Below Governor Pete Ricketts, at the lecturn, dedicates the courtyard fountains at a Sesquicentennial Celebration with members of the Nebraska Capitol Commission and other distinguished guests present in the northwest courtyard. 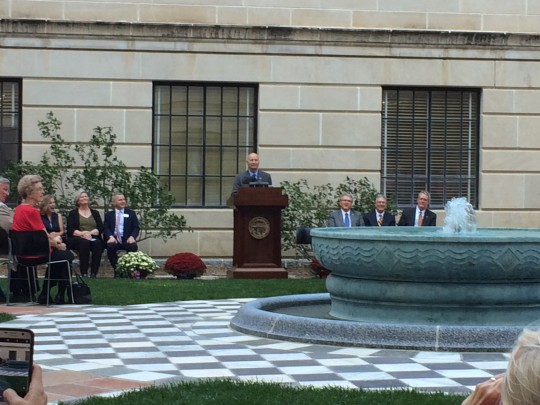 A successful fundraising campaign by the Garden Committee of the Nebraska Association of Former State Legislators has resulted in the restoration of Landscape Architect Ernst H. Herminghaus’ original planting plan for the Nebraska State Capitol’s Courtyards. Began in late April 2020 the project was substantially completed by September. Following this initial installation of the courtyard landscaping, Campbell’s Nursery will return for final planting in each courtyard as the HVAC project work moves through the building.