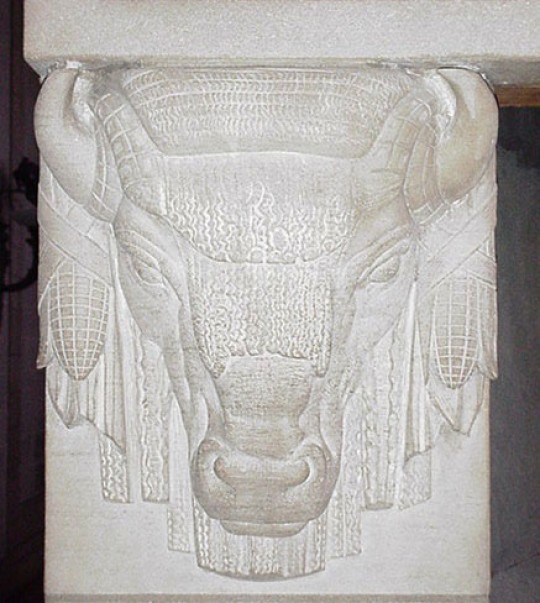 Bison carving in the limestone fireplace 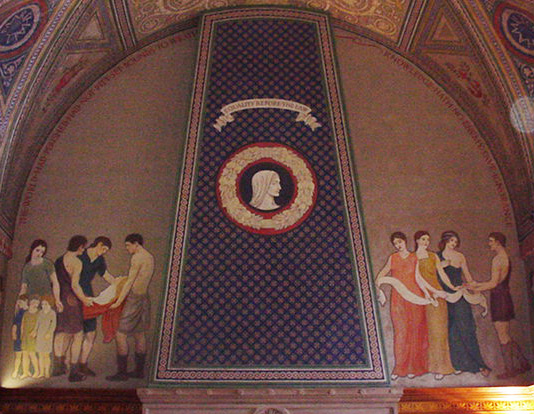 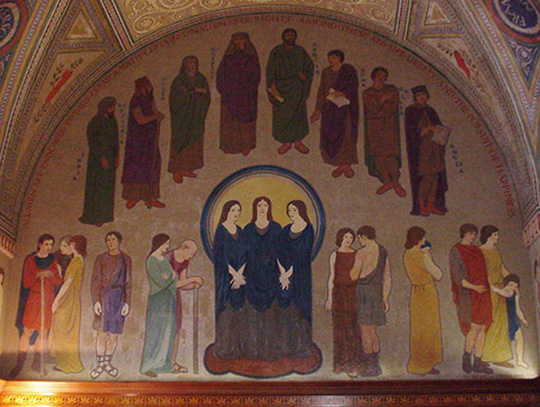 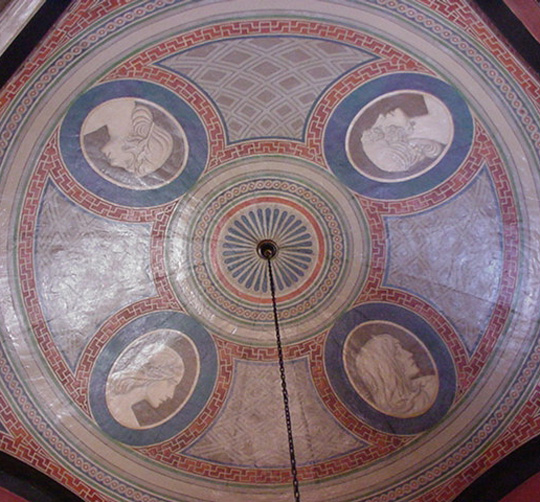 Four seasons in the dome above the Governor's desk 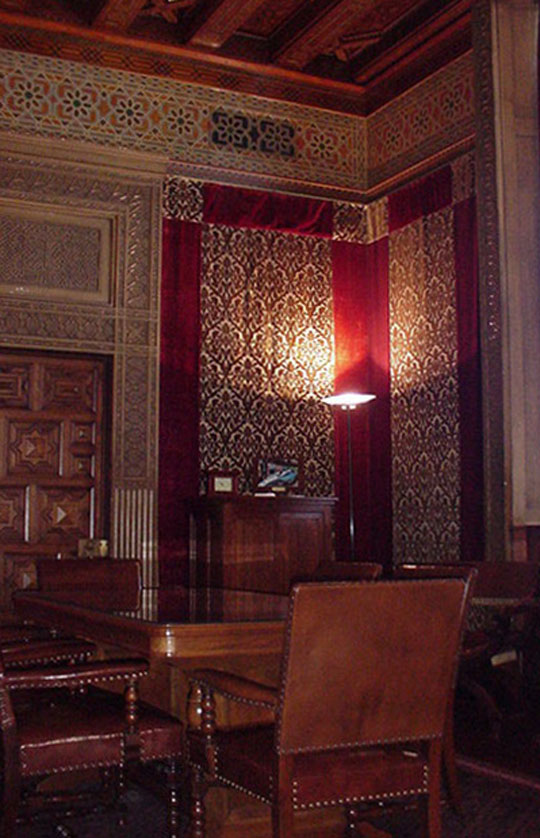 The conference area within the Governor's private office

The Governor of Nebraska conducts state business in the most ornamental office suite in the State Capitol. The four chambers of the Governor’s Suite are united with Italian Renaissance Style decoration. The Hearing Room, the Reception Room, the Secretary’s Office and the Governor’s Private Office feature custom furnishings. In-laid, board room matched walnut wainscoting, decorative plaster relief, three fireplaces, and painted and stenciled ceilings enhance the Suite’s appearance. Behind the Indiana Limestone fireplace in the vaulted Reception Room, is the Hearing Room where the Governor conducts news conferences and meets with visitors. On the opposite side of the room, the Chief of Staff utilizes the Secretary’s Office with its coffered plaster ceiling and walnut paneling. Beyond that is the Governor’s Private Office. Decorative details in the Suite feature symbols of Nebraska’s prairie agriculture heritage.

Capitol architect Bertram Grosvenor Goodhue (1869-1924) chose fellow New Yorker and muralist, Augustus Vincent Tack (1870-1949), to create the oil on canvas murals which simulate fresco and decorate the Governor’s Suite. Tack’s murals were installed in December 1927. In his lifetime Tack was known for his portraits, and was later acknowledged for his abstract expressionist painting. Tack chose to portray Nebraska’s citizens in an Italian Renaissance style to emphasize the timelessness of the rights and responsibilities of citizens in a democracy. The overall theme of his paintings is “Ideal Government and Ideal Life”.

In the wall separating the Hearing Room from the Reception Room is a large stone fireplace. The limestone fireplace is decorated with carvings of bison and corn; the corn motif is also used in the inlaid border of the wainscoted walls.

On the hood above the fireplace is a crest featuring a pioneer woman and the Nebraska State Motto Equality Before the Law. On either side responsibilities of the state are represented, taking care of the infirm and helpless, and educating.

At the opposite end of the room, on the east wall, Justice is being tempered by Mercy and Understanding. On either side of those three figures, the citizenry is represented. In the arched area above the “Law Giving Civilizations” are shown.

On the side walls qualities the state protects, motherhood and marriage, and the guarantees of the state to its citizenry, freedoms of speech and religion and the right of suffrage are portrayed. The ceiling murals represent the occupations of life, agriculture and industry, as well as the four elements.

The Governor’s Private Office is the most ornamental in the Suite with molded plaster door and window casings, voided silk velvet wall hangings, and custom walnut furniture. The conference area displays a stenciled walnut beamed ceiling over a bordered walnut plank floor with hand knotted oriental rugs. Through a pair of Italian marble columns the Governor’s elaborately inlaid walnut desk sits under a domed ceiling painted by Tack. The surrounding lunettes depict the four seasons of agriculture. Beside the desk is a fireplace with an intricately inlaid walnut over-mantel.

The Office of the Capitol Commission preserves the Governor’s Suite and its furnishings for current use and for future generations. Restoration activity in the Suite is ongoing and has included: mural cleaning and conservation, the replication of drapery and drapery hardware, the restoration of hardwood floors, and research and re-manufacture of tooled and stenciled leather to restore the suite’s chairs. The addition of modern technology in the Suite is accomplished with the use of compatible materials in a non-intrusive manner.