Imagine the scene 100 years ago, south of downtown Lincoln, in a residential neighborhood, the new Nebraska State Capitol was under construction. Nebraskans, but especially Lincolnites, watched the progress of the project. It was a very different work environment than today, no fences to keep spectators away. Imagine the excitement of the boys watching the work being done. Trees were cleared from the grounds, a railroad spur line was built east along H Street and around the second Capitol to carry material. Heavy equipment, for the time, was on site digging the foundation for the new Capitol. Men and horses were everywhere. The activity surrounding the construction of the new Capitol was photo documented by William L Younkin, the architect’s on-site representative, in a scrapbook held in the archives of History Nebraska, and by Charles Fowler, junior construction engineer, and presented in “Building a Landmark” published by the State of Nebraska in 1981. University of Nebraska engineering student George DeFord came on site and documented some of the early work in photographs recent acquired by the archive of the Nebraska Capitol Collections. The Office of the Capitol Commission is always looking for documentation concerning the construction and use of architect Bertram Goodhue’s Nebraska Capitol. If you have photos taken by family members lucky enough to be on site during construction, or other photos of the Capitol, and would like to share them with the Capitol Commission, please contact the Capitol archivist at 402-471-0444, or email karen.wagner@nebraska.gov.

The following scenes of construction are taken from historic photographs held by the Office of the Capitol Commission and History Nebraska with cropped and enlarged scenes of citizens on site watching the progress. These images will transport you back one hundred years, to a time when construction of Goodhue’s building was just beginning. Imagine the excitement and awe, as Nebraskans embarked on this major construction project. 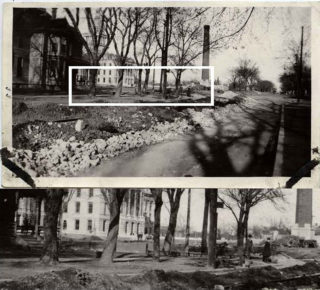 After work ended for the day, residents survey the progress of the rail line. Imagine sitting on your front porch and watching the 437 foot square basement being excavated and the foundation poured. Over the next 10 years the 400 foot tower would rise to dominate the Lincoln skyline. 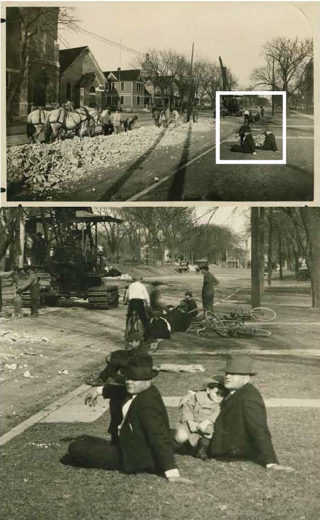 Workers on H Street tear up paving to allow for tracks to be laid using horse, man and machine power. Neighbors and children, possibly on their way home from school watch the work, sit and watch the work. Bicycles tossed in a pile will carry them home for supper. The toddler in father’s lap may not remember the work, but will be able to say, I was there. 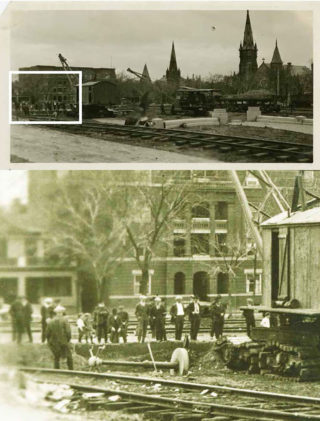 Once the tracks were laid cranes pulling scrapers begin to excavate the foundation.  Standing nearby to watch the heavy equipment work are men and boys from Lincoln. In the background are a house and apartment where the OCIO Building and the Standing Bear Justice Administration Building now stand.

The first concrete was poured on site May 25, 1922 and filled foundation piers on the northwest side of the Capitol. 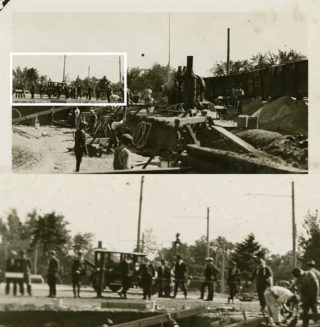 At the south end of the work site Lincolnites gather to witness concrete moving down the chutes into the hand dug 30’ deep piers. Up to that point it was all dirt work, this was the first step of actual construction activity. 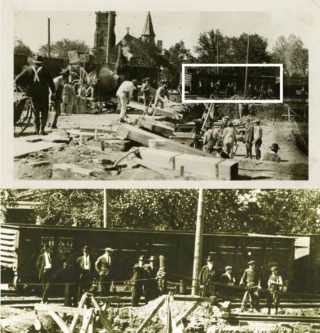 Looking north on the same scene of the first pour Younkin records another group of spectators gathered at the excavated basement. Throughout the summer and fall, men continued to work while Lincolnites kept watch. In 6 ½ months the site was transformed from the groundbreaking on April 15 to the laying of the cornerstone on November 11, 1922. Imagine the sense of wonder and anticipation of citizens to see what would come next in the monumental construction project in their back yard.