Hartley Burr Alexander, Professor of Philosophy, was born in Lincoln, Nebraska, in 1873. He spent his youth in the Midwest and his school years in Syracuse, Nebraska. He received his bachelor’s degree from the University of Nebraska in 1897.

After receiving his doctorate in philosophy from Columbia University in 1901, he worked in the East as an editor until his appointment as a professor and dean of Philosophy at the University of Nebraska in 1908. In 1928 Alexander went to Scripps College in Claremont, California, where he helped establish the philosophy program and remained there until his death in 1939. During his life, Alexander studied Native American cultures, writing extensively on the subject. During his university career he wrote many books and essays on democracy and political thought. He brought this background to the work for Nebraska’s Capitol. Alexander’s philosophical ideals can be read throughout the inscriptions placed on the building and in the themes which the artists followed as they decorated the Capitol. Alexander’s collaboration with Goodhue on the Nebraska State Capitol lead to his involvement in the design of other notable structures, including Joslyn Art Museum in Omaha, the Oregon State Capitol, Rockefeller Center in New York, and another collaboration with Goodhue on the Los Angeles Public Library.

Alexander’s themes for the program of art and symbolism in the Nebraska State Capitol were based on human settlement in Nebraska and the development of democracy as a form of government. In developing and writing the inscriptions for the interior and exterior of the Capitol Alexander drew upon statesmen, philosophers, Plains Indian lore and his own insight. The inscription over the main entrance of the Capitol was inspired by his father, who had taught him, “The Salvation of the State is Watchfulness in the Citizen.” Watchfulness, and our responsibility as citizens to work for a more noble life guided Alexander’s thoughts. 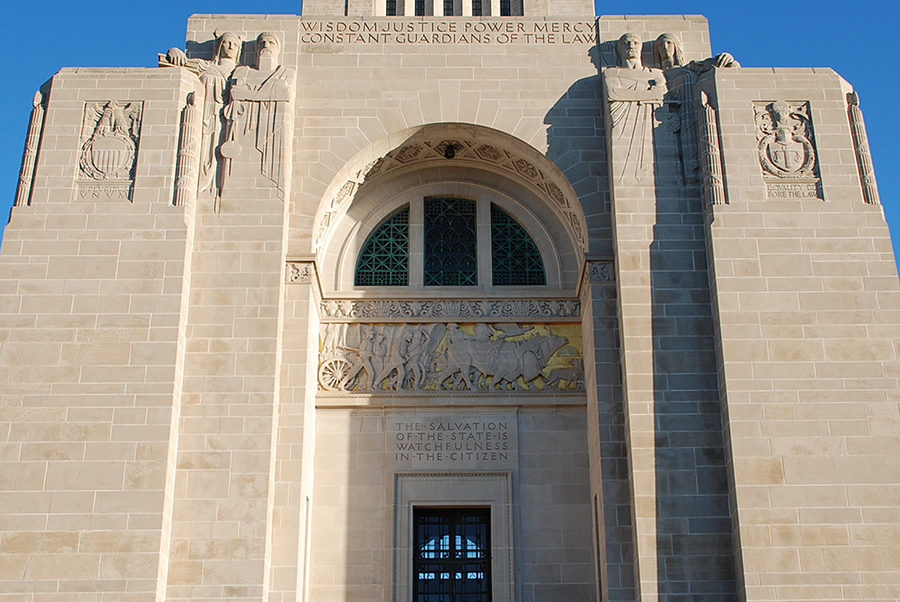 INSCRIPTIONS ON THE NEBRASKA STATE CAPITOL

THE SALVATION
OF THE STATE IS
WATCHFULNESS
IN THE CITIZEN

LAW AND ORDER DELIVERS THE SOUL—Plato

A COMMUNITY LIKE AN INDIVIDUAL HAS A WORK TO DO—Aristotle

THE BASIS OF OUR POLITICAL SYSTEM IS THE RIGHT OF THE PEOPLE TO MAKE AND ALTER THEIR CONSTITUTIONS OF GOVERNMENT : BUT THE CONSTITUTION WHICH AT ANY TIME EXISTS, TILL CHANGED BY AN EXPLICIT AND AUTHENTIC ACT OF THE WHOLE PEOPLE, IS SACREDLY OBLIGATORY UPON ALL: THE VERY IDEA OF THE POWER AND THE RIGHT OF THE PEOPLE TO ESTABLISH GOVERNMENT PRESUPPOSES THE DUTY OF EVERY INDIVIDUAL TO OBEY THE ESTABLISHED GOVERNMENT
From Washington’s Farewell Address

WITH MALICE TOWARD NONE: WITH CHARITY FOR ALL: WITH FIRMNESS IN THE RIGHT AS GOD GIVES US TO SEE THE RIGHT: LET US STRIVE ON TO FINISH THE WORK WE ARE IN: TO BIND UP THE NATION’S WOUNDS: TO CARE FOR HIM WHO SHALL HAVE BORNE THE BATTLE AND FOR HIS WIDOW AND HIS ORPHAN: TO DO ALL WHICH MAY ACHIEVE AND CHERISH A JUST AND LASTING PEACE AMONG OURSELVES AND WITH ALL NATIONS
From Lincoln’s Second Inaugural